Technology is moving at such a clip that the traditional role of a sales person is in question. But can a robot ever replace the human touch?

This is a follow up to an excellent article written by Geoffrey James on inc.com titled Robot salespeople? Don’t hold your breath. It’s not that I disagree with Geoffrey; there will always need to be a human element in sales, but I think that there are parts of the sales person’s job that will be replaced by robots.

But here’s the thing, this will be to the sales persons benefit.

Allow me to explain.

By some estimates, sales people only spend about 25% of their time talking to clients, with the rest dedicated to admin work. To make matters worse, sales people are often the highest paid people in most organizations.

The most expensive labour is being used poorly because sales people are being tasked with too many tedious tasks. It doesn’t take an economics degree to see the problem.

The auto industry had this problem as well, and they solved it with a factory floor full of these. 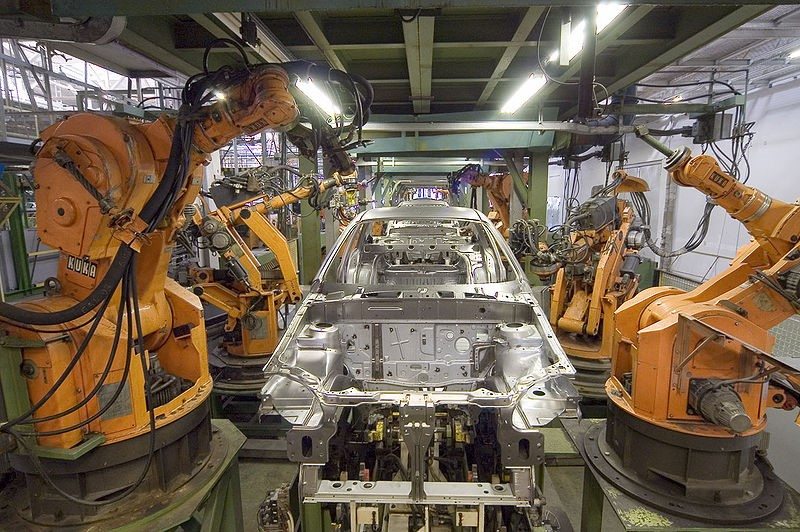 Is this what your next sales team will look like?

Salespeople right now are in the same position as auto workers before robotics came along; they’ll still be needed, but robots will do much more heavy lifting and the sales people that survive will be highly qualified technicians who oversee the robots.

Marketing automation is already edging out sales people because, for many things, they simply do a better job. Things like follow ups, qualification, and prospect research are handled better by robots than by humans. For example, a few days ago I received this email from a Marketo sales rep: 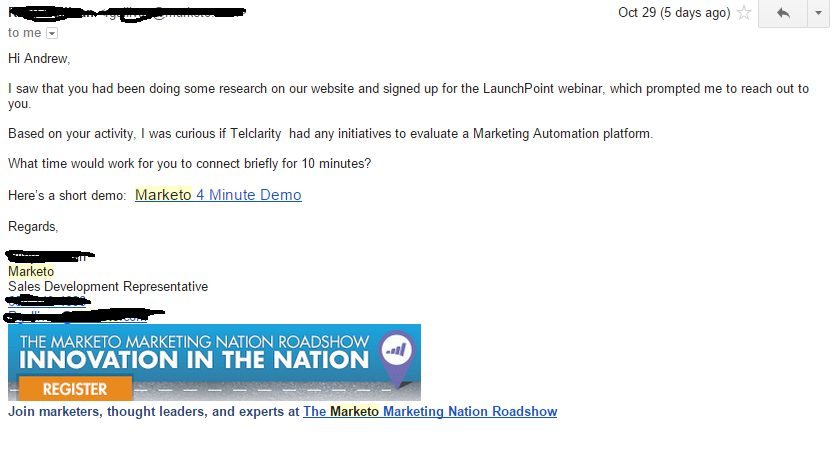 This email was not sent by a sales rep. He probably got an alert that the email went out to me, but he almost certainly didn’t send it. It went completely automatically.

And it was extremely timely.

The reason I was contacted was because I attended some webinars and visited their website a few times over the last few days and months. All of this activity was tracked and through a process called “lead scoring.” Lead scoring tracks prospect behavior, website visits, email opens, webinar attendance etc, and uses this information to assess which leads are most likely open to talking to a sales person or being made a specific offer.

In short, lead scoring helps companies contact the right person, at the right time, with the right offer.

Good luck being that on the ball as a salesperson

Now, it’s worth noting that Marketo actually had me tagged as a hot prospect when I was in fact, a tire kicker. But the alternative would be for sales to contact (and annoy) every single prospect that shows even an inkling of interest rather than using analytics to determine if it is the right time to get sales involved. However, over time this can be tested and improved which isn’t as easy to do with sales people.

I rejected his offer, but he hasn’t stopped. Getting rejected in sales hurts and despite me telling him “not right now” he continues to send me regular emails announcing things like webinars, white papers, and other educational material; 100% automatically. Importantly, none of this material screams SELL SELL SELL, and the emails I receive are highly targeted and relevant. For that reason, it doesn’t annoy me when I receive them, and if I were in the market down the line, Marketo would be on the short list of vendors.

A salesperson, on their own, simply doesn’t have the time or analytics to maintain this kind of nurturing strategy. Robo marketers do.

But it’s still about people.

Like sales people, nothing will ever be perfect, but it’s better to execute consistently on imperfect information than to not execute at all. After all, it’s exactly what salespeople do already.

But with automation it’s possible to measure failure of execution,
rather than the more common failure to execute of sales people, who don’t contact up to 35% of inbound leads provided to them by marketing.

We’re a long way off from fully automating sales, but a lot of the tedious stuff is already being done by machines, and it is accelerating at a dramatic clip.

And for the stuff that will still need to be done by sales people?

A lot of things salespeople do is repetitive, and a lot of it should be semi-automated. The sales person’s role is to pull the trigger on an action, but the behind the scenes stuff is handled by automated processes.

Proposals? Proposal software like QuoteRoller or BidSketch can do most of the work.

Cold outreach emails? Email template systems like Yesware, which can track opens and response rates across an entire team.

As a case in point, a client I helped implement these technologies for got their proposal preparation times down to <20 minutes, their cold email response rates to >10%, their dials per hour >45 and their inbound lead response rate to <2 minutes.

Their sales pipeline tripled in less than 2 months.

If fully automated processes are factory robots, semi-automated tools would basically be this, a farm combine 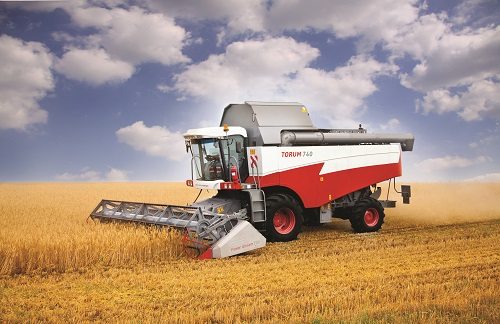 This is basically what semi-automated sales tools are.

Sales people are not going away…but there will be less of them.

This is where my opinion diverges from Geoffrey. I believe that there will always be a need for sales people to close the deal, but I think that software is going to reduce the number of sales people needed since they will be a lot more effective at their jobs and will close more business per rep.

There is one thing though, that will never change: poorly executive strategies, whether done by sales team or software, will never work.

Sales versus marketing: Can’t we all just get along?

The single biggest thing that is annoying your customers is…